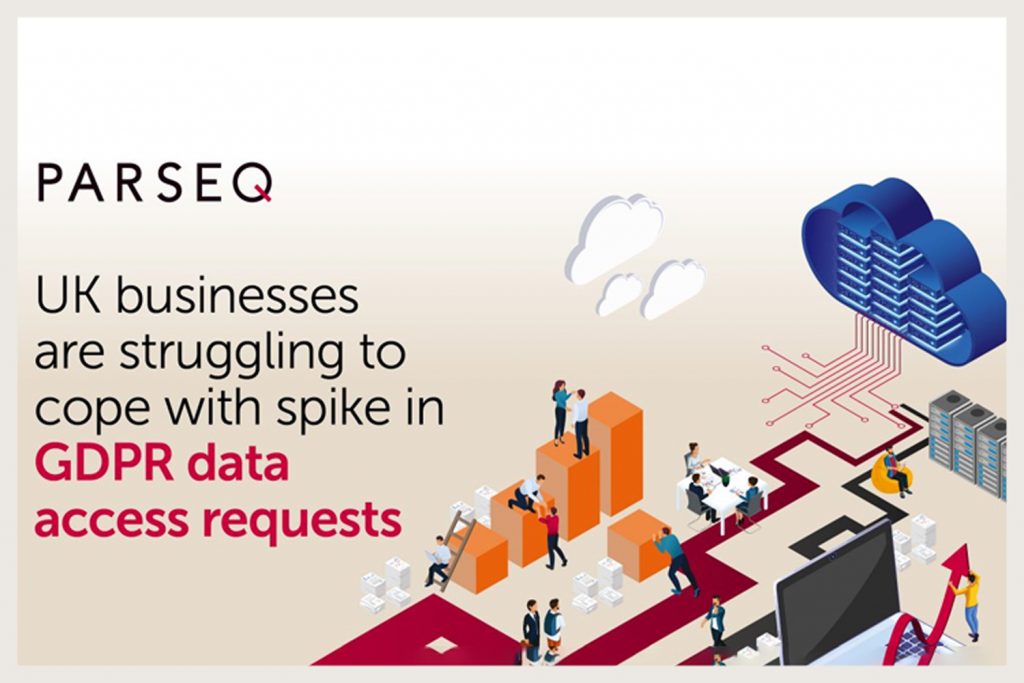 The research, conducted following the first anniversary of the GDPR, showed that two thirds of UK businesses (63%) saw an increase in data access requests from customers and their own employees in the 12 months following the GDPR’s introduction in May 2018.

One in ten (10%) businesses experienced an increase of more than 50 per cent in the volume of requests. This rose to almost a fifth (17%) for businesses with a turnover of £500m or more.

Almost nine in ten (87%) businesses that have seen an increase in requests reported that they’d found effectively responding to them challenging, citing complexity (54%) and cost (54%) as the biggest obstacles.

A third (34%) of businesses that had experienced an increase in data access requests cited a reliance on paper documentation as a barrier. This figure rose to 47 per cent for businesses with a turnover of £500m or more, tying with a lack of time as their second most frequently flagged hurdle after cost.

Craig Naylor-Smith, managing director, Parseq, said: “The GDPR made it easier for people to access their personal data from organisations. With this power at their fingertips, we expected to see that data access requests would rise.

“However, the fact that so many firms have struggled to respond to the surge in requests suggests that the pressure this has put on businesses has been greater than they anticipated, or that many were simply unprepared for what GDPR would bring.

“It could also have been affected by the August 2019 deadline for consumers to claim back Payment Protection Insurance, with individuals possibly using data access requests to help them uncover information to support their claims.

“What’s particularly interesting to see is that so many businesses state a reliance on paper documentation as a barrier. The digitisation of paper documents can make personal information easier to process and manage, make data access requests easier to respond to and, ultimately, help businesses use data to deliver innovative services in an increasingly competitive, digital landscape.”

Parseq’s research also examined the efforts that businesses made to digitise paper documentation containing employee and customer data in the 12 months before and after May 2018.

Improving data privacy and complying with the GDPR was the biggest driver of digitisation in the year before (50%) and after (52%) May 2018.

However, only seven per cent of respondents digitised all the paper documentation they held in the year prior to the GDPR’s introduction. This rose to eight per cent in the 12 months following.

This result was higher, but static, among businesses with a turnover of more than £500m. Here, almost one in six (15%) had digitised all of their paper documentation containing customer and employee information in both the years before and after the GDPR came into force.

Businesses that didn’t digitise all of their paper documentation containing customer and employee information in the year before the GDPR cited cost (42%) and the maintenance of archiving facilities to store paper documents (40%) as the biggest barriers.

Following the GDPR’s implementation, cost (36%) and the maintenance of archiving facilities (35%) were just overtaken by a lack of time (38%) and a lack of staff resource (37%).

Craig Naylor-Smith added: “It’s encouraging to see that businesses are turning to digitisation to meet the demands of data privacy and complying with the GDPR,  but it’s clear that only a small proportion have been able to digitise all of the paper documentation they hold containing customer and employee data.

“Cost and investment in existing archiving facilities are evidently widely perceived barriers to digitisation, however, in our experience, this is not the reality. The initial outlay involved in digitisation is usually outweighed by cost efficiencies generated in the long term. Money that is, for example, tied up in maintaining a space where paper documentation is stored, can be invested elsewhere once the information it holds is digitised.

“At Parseq we offer our clients solutions that make use of technologies such as Robotics Process Automation (RPA) and optical character recognition to build digital, searchable, archives of paper documents.

“This can not only help drive efficiency and reduce costs, but also help businesses quickly and securely access important information as and when they need it – a real advantage in efficiently responding to data access requests and, ultimately, avoiding potentially significant financial penalties from regulators.”

Originally published in The Daily Telegraph